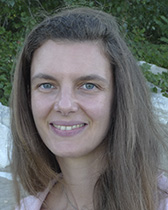 Marianne Hopman (PhD Harvard University and Paris Sorbonne) is a scholar of ancient Greek culture with an expertise in archaic and classical poetry and special interests in literary theory, feminist studies, animal studies, posthumanism, and the environmental humanities. She is the author of Scylla: Myth, Metaphor, Paradox (Cambridge University Press, 2012), the co-editor of Choral Mediations in Greek Tragedy (Cambridge University Press, 2013), and the author of articles on Homer, Athenian tragedy, and Greek hymns. Her current book project, entitled Prometheus’ Gifts: Environment and Technology in Fifth-Century Athens, draws on the fields of Classics and the environmental humanities to offer a contemporary reading of the fifth-century BCE tragedy Prometheus Bound as an attempt to come to grips with the question of how humans and their inventions fit into the world.

Hopman served as director of the French Interdisciplinary Group from 2012 to 2017 and currently chairs the Classics Department at Northwestern University. Honors and fellowships include the John J. Winkler Memorial Prize, a grant from the Loeb Classical Library Foundation, and an AT&T Research Fellowship. In early 2015, Professor Hopman was named a Chevalier dans l’Ordre des Palmes Académiques by the French Ministry of Culture.

At Northwestern she teaches undergraduate and graduate courses on Homer, Athenian tragedy, ancient love poetry, and their reception through contemporary times. In both her research and teaching, she asks how the study of the ancient past can contribute to historicize, criticize, and possibly modify the contours of current debates, especially those pertaining to gendered hierarchies and the environmental crisis.