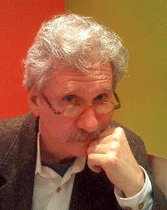 Reginald Gibbons is the author of nine books and two chapbooks of poems, a novel, and other works, including translations (with Charles Segal) of Bakkhai and Antigone and translations of Sophokles, Selected Poems: Odes and Fragments. His book Creatures of a Day was nominated for the 2008 National Book Award for a poetry collection. During 2011-12, he was a Fellow of the Center for Hellenic Studies. He has also translated Selected Poems of Luis Cernuda and a volume of poems and prose by Jorge Guillén (trans. with Anthony L. Geist), and he edited and served as principal translator for New Writing from Mexico, a special issue of TriQuarterly magazine. He is Director of the Center for the Writing Arts, has served as Chair of the English Department, and is an affiliate of the Classical Receptions Workshop

Gibbons and the 2008 National Book Award Nominations
for poetry collection, Creatures of a Day