From the halls of Northwestern to Roman Ruins

Prior to starting my semester abroad, I wasn’t totally sure what to expect. I’d first heard word of ICCS, supposedly some exceptional Classics program centered in Rome, as a freshman, and it was in the back of my mind after that. When I later heard that there was not enough applicants for the coming fall quarter of my sophomore year, I seized the opportunity. I trudged through all the paperwork, and after a brief period of anticipation on the waitlist, was finally accepted. It was then that the full significance of what was happening hit me: I was going to live in Rome. For an entire semester. I guess it wasn’t until that point that I fully realized what an amazing thing I’d gotten myself into. A busy spring quarter at Northwestern and a lazy summer at home soon passed me by, and then I packed my bags for the greatest city in the world.

Whatever my expectations were, they paled in comparison to the reality of my time in Rome. I had already visited the city and its sights in my senior year, and that was already an experience in and of itself. But that trip was only skimming the surface, whereas spending an entire semester in Rome was like drowning in everything it had to offer. I was completely unprepared for how much was coming my way, and how much I was going to enjoy all of it. But I won’t lie, the program was intense and exhausting. As a class we spent long hours in the field, visiting and enjoying everything the city offered like tourists, but also listening and furiously taking notes like students. We suffered together through many a quiz and essay, and we even had several site interpretations, which were a completely new (and terrifying) experience for me. 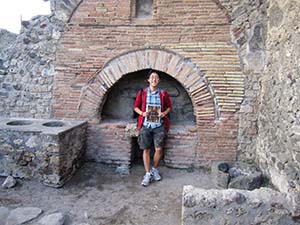 Yet, the end result was a wholly thorough Classical education. We all gained an in-depth understanding of countless ancient sites and structures which were, in the most basic sense, nicely arranged rocks. There’s something to be said about not only seeing but also understanding the ancient ruins we saw, and how from that I was able to appreciate them all the more. From my earlier studies I had a vague image of the way ancient Rome was, but now I can also see so much more of the how and why, which is so much more interesting. Ultimately, I think that’s why we study Classics and so, as a Classics major, I feel fulfilled. My semester was amazing.

Feel free to contact me for questions about the program!