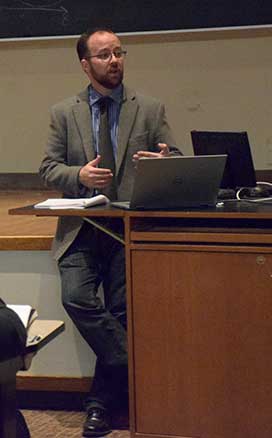 What initially sparked your interests in the Classics and Greek Literature?

I started off interested in English literature, especially Milton and Chaucer, through whom I developed an intense desire to learn Latin, which I began in high school. There was, however, no Latin taught at my high school, but a very kind English teacher offered to teach it to me himself. When I went to college I continued studying Latin and added Greek, although I still had the intention of using it primarily to aid in my study of English literature. But I couldn’t get enough. It never stopped being worth learning more of, so I just kept going.

What unanswered question from ancient Greek civilization fascinates you the most and/or do you wish we had the answer to?

What interests me most is how the literature that we have relates to what we don’t have, the stories and songs that were never recorded but were nevertheless part of the fabric of ancient life and the source from which our earliest literature developed. I want us to know as much as possible about how Greek poetry worked before writing and how oral poetry gave us our earliest western literature. I’m particularly excited by the fields of comparative poetics and historical linguistics because they have given scholars new tools for researching verbal art, tools that have never existed before. Through them I would like to see us push back the date of what is knowable in literature studies, and to understand better the birth of western literature.

When you were a student learning ancient Greek, what was most difficult for you and how did you overcome it?

The hardest part of language learning for me was that I was never good at guessing. If I didn’t know a verbal form or a word meaning I wasn’t good at just getting the gist of the sentence anyway. That is what led me to linguistics. Historical linguistics became my key for learning Latin and Greek grammar really well. Linguistics itself is not easy, of course, but it does make learning ancient languages much easier. When you know where mi-verbs come from, for example, their forms aren’t so complex anymore. When you’ve studied word formation patterns historically, you can make very good guesses even about words that you’ve never seen before. It is the most powerful tool for language learning that exists.

What is the most enjoyable aspect of teaching for you, and why?

The most rewarding part of being a teacher is seeing students encounter new knowledge and become excited by their own new skills. I have a real passion for the nuts and bolts of my field and I love sharing that with students, but the very best part is helping students realize what they can do with their new knowledge, watching them become excited by the new insights and abilities that that knowledge affords them. This is true in every class but is especially clear in classes on ancient language. Through my Greek classes I see students gain access to an entirely new and important canon of literature, while developing genuine insight into a profoundly influential ancient culture. They are able to leave these classes with powerful new abilities that pay off throughout their lifetimes. It is a privilege and a joy to help them achieve that.

What is something about you that no one would know?

Well, I’m not very secretive, but I do have a serious interest and hobby in American traditional music that not everyone realizes. I play guitar and mandolin and I learn about American folk tradition whenever I’m not studying Greek folk tradition.

What are some of your most memorable moments in teaching?

My most memorable experiences are of times when I worked closely with students on unique research and writing projects. I’ve been very fortunate to advise students as they transitioned from learners to producers of knowledge themselves, as they took the information and skills that they developed in college and put them toward discovering something new. It’s immensely satisfying to guide students into that and to see them produce something that is good and meaningful, that testifies to their hard work and enthusiasm as well as to the success of the mission of higher education